We’re running Ignition 8.1.14 and are having a weird visualization issue with x-traces on the Power Chart component. When using a touch screen or simulating a touch screen, placing an x-trace on a real time trend will sometimes produce a second x-trace that becomes slightly offset and makes the intended x-trace look blurry. When another x-trace is added, the unintentional x-trace changes position to shadow the newest x-trace only: 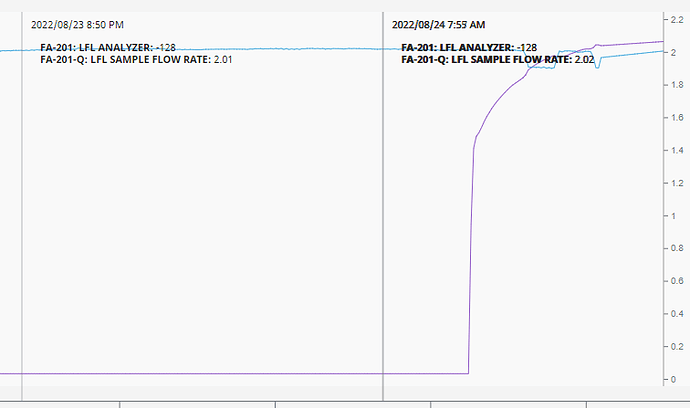 When investigating the elements in the browser, I find that an additional time marker is inserted separate to the array containing the intended time markers:

Additionally, if the trend is in real time mode, the position continuously decrements by a tenth, offsetting it more and more as time passes: 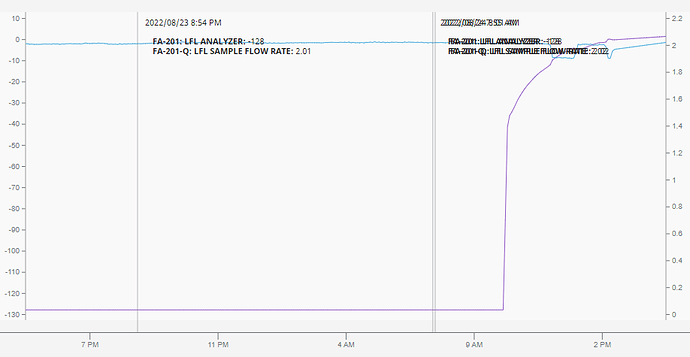 If it’s in historical mode, then the position doesn’t decrement, so even if the odd duplicate x-trace is added (which I can see in the elements), it perfectly overlaps the intended x-trace, so everything looks fine.

Is there anything I can do to fix this so it never looks blurry in real time mode?

I am having trouble replicating this behavior. Would you be able to show this on a remote session? You can do so by contacting our support department.

Thank you Munkhbat, I will submit a request. It is a finicky issue to recreate, both because it needs to be on a touchscreen or simulating a touch screen while in real time and because sometimes it takes a few times of clearing x-traces and replacing them to get it to happen.