Printing the name of the function and who called it?

In the process of converting a lot of spaghetti code to organized script modules and multiple functions. One drawback I’ve noticed to this is that sometimes the error messages are truncated and not as helpful or specific as if the script was on the button onAction script. I will just get errors that show a Key I tried access in a dictionary that doesn’t exist, or a type error, but no line number or even what function this occured in. I am trying to mediate that.

What I am looking for is some function I can call in the beginning of other functions so that it will print out the current function and what function called it if possible. 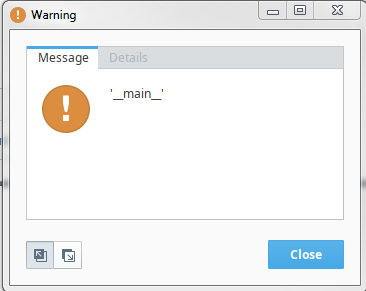 I assume this has to do with the odd runtime environment Ignition is, java calling python scripts etc and so I’m not sure if there is a python stack to really access like there would be in a traditional all python application.

Is there another way to do this? I would really like a function I could call as the first line of other functions that will just print “Running function (function name), called by (function name)”

You might find inspiration in the PythonAsJavaException class in my later.py script module.

How I would in practice use this?

It’s a bit over my head - how could I use implement say in a situation like this for a module lets call barcodes?

Now say I ran barcode.create(data) from my GUI, how would I use your class to have printed to the console

You wouldn’t use my class. I said inspiration. I would use python/jython’s exception machinery to generate a traceback. With raise inside a try block, if not directly. The traceback has the information you want. That class is an example of traversing it.

I’m also in need of something like this…
@bkarabinchak.psi Did you ever get it working?

You can use sys._getframe(1).f_code.co_name to get the caller’s name.
I’d make a decorator for this, something like

OK, thank you for that…
But I probably don’t understand all this … sh*t…

If I put this in the button actionPerformed script, I get

But from where is foo called…? What does <module> means?
I’d expect to see something like … button’s name.actionPerformed…instead of <module>?

There might be ways to make it more accurate (get the module’s name, things like that…) but I have no idea how all this interacts with Ignition’s components. You might need to call upon Java for this, I don’t know.

No, I gave up and just hand traced how the code was being run, now I just judiciously use a logger where needed, logger.trace(“Running function x”) is the first line of any function I care to know and use logger.info()'s at important junctions. I also restructured my code so it’s not really a mystery who’s calling what anymore so I didn’t need this anymore. Sorry can’t be more helpful

I imagine <module> refers to the scripting module you have your functions in but I am not an expert here.

If you create a java exception instance you can get the java call-chain that ran the jython script, but you won’t get a specific component instance. It does generally reveal a component type, which can narrow down your search. Most of Ignition’s event machinery yields <module> when the source is an anonymous script.

You have to address this in your design pattern:

There is no other magic.

Are there any specific reasons to do this other than organization, code reuse, exception handling etc…? I’m rolling through a large library of components and moving the logic as much as I can into a project library function for basically just organization. I was just curious if there were other benefits on the java/jython/Ignition side of things that we might see as a side benefit.

The biggest reason is to avoid legacy scoping rules. If you search the forum you can find tons of examples of the different ways in which legacy scoping creates issues.

To sum things up succinctly:

Generally speaking, the easiest, most maintainable thing to do is immediately bail out of your gateway timer script to a function defined in a real project script, and have all of your logic there. Besides modern scoping, you also get the benefit of true diffing of project changes if it’s in a project script.

Thanks! That makes sense.

We’ve never run into that exact issue so we’ve been running along w/o issues on event scripts. We’ve been going through fixing up our standards and just wanted to have a bit more of an explanation for future users.