Is this something I need to do to get new roles recognised in order to use them in the project properties?

I created a new dummy role to test with ‘PROJ’ which I can see in the list of roles using alt+space, but when I select it, it shows a cross and it doesn’t apply it… 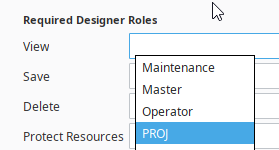 I’ve tried restarting the gateway fwiw and also using a classic user source as well as an IdP, both have the same issue… however other pre-existing roles DO work??

I restarted the Designer itself and that seems to have fixed it. Maybe it doesn’t let you assign a role to which you’re not a part of? (I was a part of it, but to the Designer I wasn’t as I logged in before I’d created the role)