Property changed event firing when I don't expect it to

I have 3 drop downs, one is unrelated to the other 2, but the 2nd populates its data based off the selection of the first one. 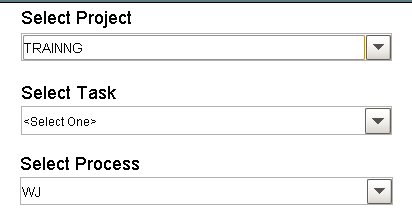 Initially I thought that changing the ‘Select Project’ drop down was setting the Select Task drop down’s value to -1, but upon closer inspection, it was not.

So I wrote a script on the property change event that just sets the selected value of Select Task to -1.
The whole script:

This is under the propertyChange event handler of the Project Selector drop down.

This led to other issues that I didn’t foresee, though. Occasionally the Task Selector drop down will change its value to -1 without any input from me, and occasionally it will change to -1 when I press my button to confirm our task.

EDIT: It actually sets the dropdown back to -1 once every roughly 2 seconds or so, which I think is my polling rate for the above drop down.

If anyone has any insight, I would really appreciate it.

If so, this is expected behavior for components that display rows from a dataset. When a new dataset is applied while a row is selected, the component briefly sets the selection to None (-1), sets the new data, then conditionally restores the selected row. Conditionally, because the new data might not have that row, and the selection will remain -1.

The simplest solution in a case like this is to not poll. Let the bindings run on window startup and then only on changes to their references.

So what would be your recommendation for this then? Changing this:

to off? Would it still fire my query on window open?

EDIT: Yep, that fixed it.

Thank you so much @pturmel

Yes, off. And yes, it will run at least once.

FWIW, I almost never use polling for queries. Once on open, then deliberate re-triggers using system.db.refresh when some other event indicates the need for fresh data. (If not handled by a change to a reference.)

I see. That makes sense. I inherited this project from someone else, and they let essentially every component poll, so I was simply following in their footsteps, but didn’t realize that polling changed the property for a brief moment, but that does make sense.