Is there any information regarding accessing of a devices camera (ios/android) further than ‘Scan Barcode’ action such as taking and storing pictures as a blob in SQL? If not yet avaliable would this be a feature that may be available in the future? 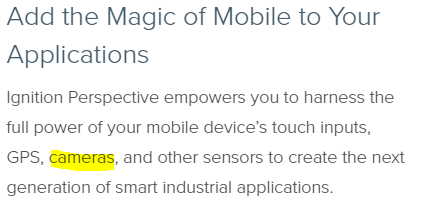 Yes, this is a planned feature - it just hasn’t been implemented yet. Exactly how it will work still needs to be ironed out, but you should absolutely be able to hand binary data back to the gateway to store into the database.

Its good to hear that this is still a planned implementation. Would this feature be planned for the initial release of v8 or is it more of a v8.1 feature?

Can’t offer an exact timeline but my hope/expectation is that it’s in 8.0 final release or a minor update shortly after.

I hope you can give a glimpse into when version 8 is to be released.
I suspect many people would be interested.

I apologize for bringing back an old thread, but I noticed this was brought up in the canny.io page: https://inductiveautomation.canny.io/ignition-features-and-ideas/p/mobile-add-camera-component

It was apparently marked as completed in April of 2019. Is there a way to access the camera in Perspective to have the user take a picture?

I don’t think that you can do that with the barcode scanner component, but possibly with a file upload if your device / browser can support it.

Although, at least some browsers (mobile Safari in particular I know does this) allow you to directly take a picture when prompted to upload a file. It’s up to your device and browser whether to prompt for this, so it’s worth trying different browsers and looking into device settings.

There it is! Thanks!