Hi, I’m using OMRON NX sereies PLC and using its in-built OPC server to publish the tags to Ignition.
I can browse the individual boolean, integer tags and get good value.
But if I want to access internal booleans in an UDT then it’s returning “BAD_STALE”.
Does anyone have any idea on how to resolve this?

Sounds like a bug (or missing feature) in their OPC server. Try the same with UaExpert or some other third party OPC client to confirm.

Tried with Kepware and Commserver UA Viewer. Can’t browse the structure of the UDT. You maybe correct, seems its a bug on OMRON’s end. Actually when dragging and dropping the whole UDT in the tag browser, the data type is “Document”

Tested with Ignition’s Omron NJ Driver. Can actually subscribe to the individual elements inside the UDT. However, the pain is that each of the elements have to be individually put inside the tag list.

Also the Omron driver from Ignition has to be paid for whereas the PLC in built OPC Server is free.

We’ve contacted OMRON. Will update with the outcome.

the tag browser, the data type is “Document”

Well, that means you can use jsonGet to read out individual elements:

You can take advantage of reading whole structs in OPC UA servers as of Ignition 7.9.12 and 8.0.0. When you bring the tag in you’ll notice Ignition presents a JSON value. The strategy here is a little involved but it works. For each of the UDTs you’ll be subscribing to in the PLC you make a corresponding UDT in Ignition. It should have a “Source” OPC tag member that will correspond to the Node with the struct value in the server and as a result have a JSON value in Ignition. Then for each memb…

It sounds like they’ve chosen not to expose the individual members of structs. The strategy @pturmel quoted is the recommended way to deal with structured values from UA servers right now.

It’s annoying, but it’s the best option performance-wise for these PLCs. Even if they exposed the structure members as Nodes in the address space you’d overload the PLC fairly quickly by subscribing to them individually.

you’d overload the PLC fairly quickly by subscribing to them individually.

They could get the best of both worlds by simply rejecting reads or subscriptions to inner nodes, but allowing writes. As it is, there’s no safe way to write individual elements of these structures.

Probably not related but worth mentioning, I recently had an issue with UDTs in an NJ-101-9000, when I pull the tag database (using Kepware 6.5.829), some UDT tags were not autogenerated correctly, I had to manually remove some characters that were added automatically… I thought I did something wrong and decided to delete all tags and auto-generate them again and those characters for the same UDTs showed up again… the weird thing is that only some UDTs were showing that behavior.

I still have in my ToDo list go and upload a backup directly from the PLC and verify the UDT configuration. We have around 25 of those and this is the first time I see that, its a new installation, though (possibly new FW).

Apparently there are issues with OMRON. 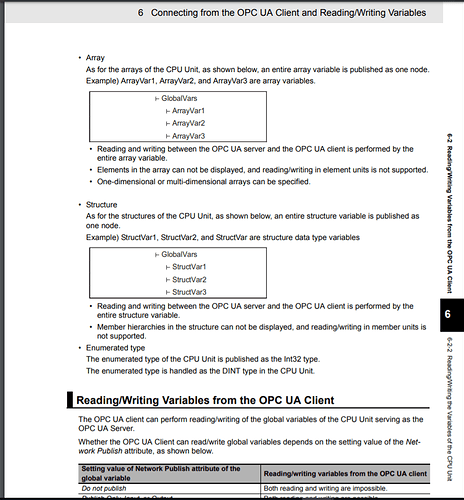