I’m getting a reference not found error in my tags. What’s odd is that if I change the value for reach set temp to evaluate to true instead of false, the error disappears. 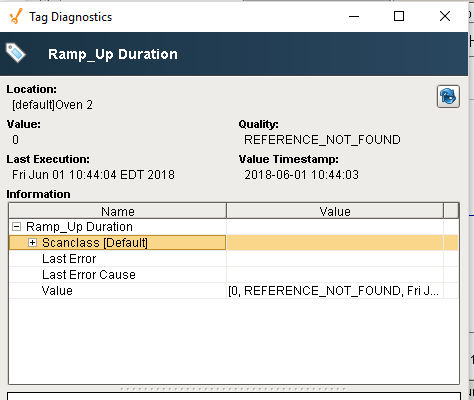 Not sure if it is the cause but your Time Set Temp Reached is less than Time Oven Start.

Ah, sorry about that example. The problem still occurs when my time set temp reached is greater than time oven start though.

Only thing I can see is your reference for Oven On, assuming you’re trying to get the Oven On tag shown in one of your screenshots, is wrong. I think it should be {[.]Oven On} since its in the same level. Though that doesn’t make sense with what you said about changing Set Temp Reached to True, but maybe something behind the scenes is causing the incorrect reference to not be evaluated because it can see the result of the and expression early.

You may have an order of operations thing going on. Try:

Other theory is that it is always encountering the problem in the expression due to the faux path, but since it knows globally the expression is False, then it ignores the problem (however this seems dull to me and prompt to problems while having none of the advantages that non-evaluating a part of the expression can have)