There is some sort of bug with making script changes and Ignition not always seeing them. I had a print debug line in the logic, changed it to a different message and now it stays at the old message. I cannot find that print statement using the project find or the scripting find. This seems like the same sort of issue I was having with a tag change script in this post http://forum.inductiveautomation.com/t/locating-an-unknown-tag-write/41633 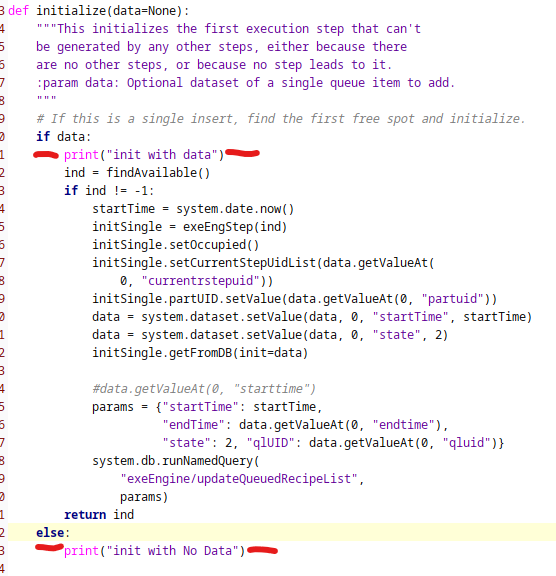 A reboot of the Ignition Gateway Service has appeared to fix the issues once again.

Where are you writing the script logic (script module/library?) and where is it executing from? Need a little more info to see if it’s reproducible.

This is a project library script being called by a SFC instance. I did confirm that running it from the Script Console it works correctly. If I stop the SFC and start the SFC again, it works until I make a change. It’s like the SFC caches the script library during execution.

Are you importing any part of the path to the script module or using its fully qualified path when invoking the function?

It would be the full path “engine.exe.initialize()”

I can easily reproduce this behavior using a timer script in an action on a chart that doesn’t end. The question now is whether this is intended behavior or not. I’ll have to write this up and come back to you at a later time…

I also noticed that SFC scripting is still using whatever is designated as the “Gateway Scripting Project”, rather than the actual project it resides in, when executing scripts, which is something I thought we fixed recently…

That would match my condition. I have an SFC that always runs and polls the function. The SFC does do other things so I cannot make it a timer based gateway script without some major rework.

I also noticed that SFC scripting is still using whatever is designated as the “Gateway Scripting Project”, rather than the actual project it resides in, when executing scripts, which is something I thought we fixed recently…

Kevin,
We have had a few calls with Travis on issues like this with SFCs after upgrading from 7.9.x to 8.
Please keep us in the loop on what is found as it is critical for us to be able to use SFC scripting like this on a project scope and not global with the new inheritance schema.

My opinion is that both of these are bugs. They are also both easy to fix.

I think there will be some internal discussion after the holidays about what to do, though, because both of them have the potential to alter the behavior of existing charts once they are fixed.