Script issue at one plant, others run fine

I have a script to pull my devices information out of Ignition and display the results in a perspective table. I have 20 plants using this same script and it is an imported project used everytime I build another plant. However a single plant errors out the code for one line that is highlighted in the pic below for ipaddress. The error is also in the snip. I also thought I was missing a module but it matches to the other plants. 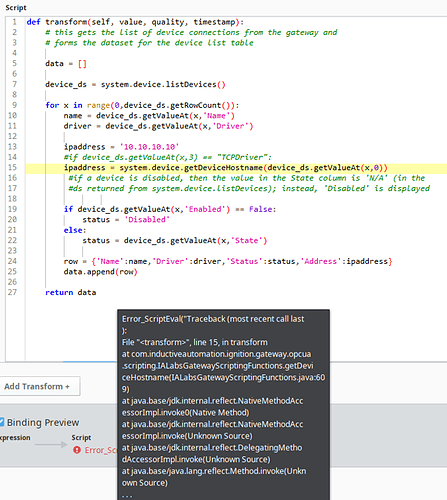 Perhaps you should employ some exception handling at this location, in case there is a device in your list that does not have a hostname property.

You might have a Simulator Running or maybe a driver that is not compatible with system.device.getDeviceHostname. Just skip like @justinedwards.jle said.

I don't even get to apply it, goes right into compiler fault. Same modules, devices and drivers as other plants.

Share data from "device_ds" to give it a look.

What is the state of the Ignition OPC-UA loopback?

In the meantime, reset the opc module if you consider is save to. WARN, keep in mind all you device connection will get lost for some seconds.

I don't even get to apply it, goes right into fault

That makes it sound like the compiler is rejecting the code for something like a syntax error. Looking at your picture, all the colons are there, and all the parenthesis [' and ()] look correct. I can't make out any squiggly red lines, but I do notice that the comment spacing under line 15 looks off, and I have had that sort of thing affect my compiles before, but it's hard to say. Try highlighting your code and using shift+tab to move everything all the way to the left. Then, redo all of the tab spacings, so that you know for sure that a copy and paste function hasn't messed your indentions up.

Beyond that, I'm out of ideas. The getDeviceHostname method was in place before version 7.9, so I can't imagine that this is a version issue.

Edit: I had used the word parenthesis, but I was really referring to these: (), I have seen the apostrophes cause a problem too when copied and pasted, but if I remember correctly, that yields a specific Unicode character fault.

Try highlighting your code and using shift+tab to move everything all the way to the left. Then, redo all of the tab spacings, so that you know for sure that a copy and paste function hasn't messed your indentions up.

Here you're looking for a mixture of tabs and spaces for code indentation. You can only use one in a code block

I tried all those things based on my same past experiences. I didn't copy and paste, I imported the project which works everywhere else.

Sounds like time to open a support ticket and let support poke around.

Can you show the full error ?

No the output console won't show the error. What I sent is all I get.

You should have the full trace in your logs.
edit: assuming that script transform actually ran. If it didn't, then clearly there won't be anything in the logs.

Logs show nothing even when I did it on purpose to create an issue so I could see it.

This is the best I can do to get the entire error message.

Looks like @jespinmartin1 was right, you seem to have a simulator running.

have a simulator running.

Yup. Simulators don't have a hostname.

Yes this was the first plant the integrator did and I am in the process of removing it after verifying it is not being used it in the background somewhere. Once done I will post the result.
I also found other discrepancies in the install of Ignition that I tried first, and needed to be done anyway.

This change works, thanks.