SQL Queries in templates that use Template Parameters

I have several charts inside a template. The properties of those charts’ data sources are SQL queries that use a Template parameter as part of the query. When I add an instance of the template to a window, it will temporarily flicker the data in the chart to whatever parameter I used in the actual template designer, ignoring the value given to the instance on the main window. This behavior stops if I turn the polling off but then I wouldn’t see the charts update.

The following screenshots hopefully illustrate this a little better. The following query should use whatever value I give the instance for BU_ID. But the data will temporarily change to BU_ID = 1 because that is the value in the template designer.

I’m sure I missed a setting somewhere. Thanks in advance as this has been driving me crazy! 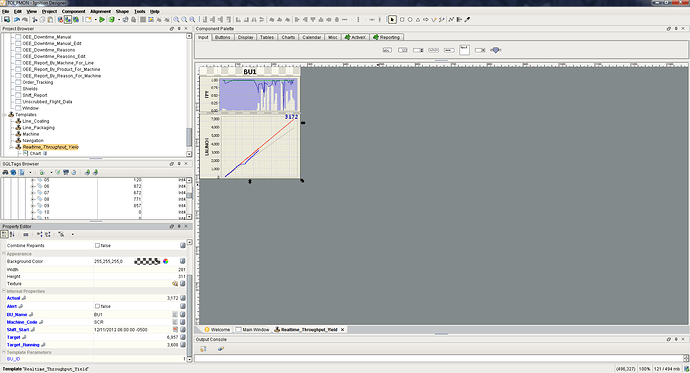 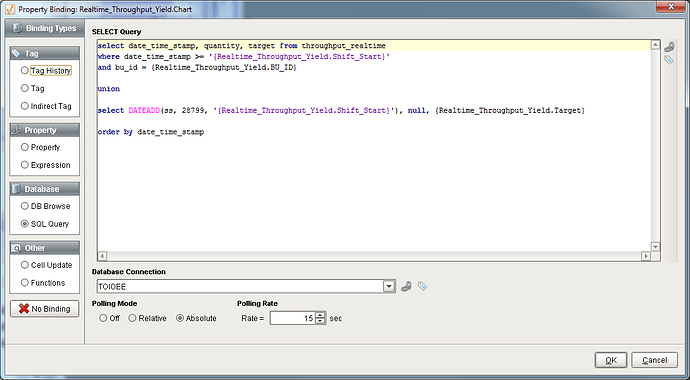 Do you ever get a screen flash like BU_ID = 1 (from the template settings) in the Ignition Client or is this a Designer only problem?

It’s actually only in the client. The designer doesn’t flicker at all. The instance’s BU_ID stays the same when I monitor it in the designer.

And it’s only in the data properties of the charts that I’m seeing this. I have assigned the value of the template parameter to a simple label and that doesn’t change.

I’m going to see if I can mock this up here. There is a ticket in our system regarding a similar situation. In that case a SQL query binding using a UDT property not a Template property. I’ll see if I can make some headway on recreating this issue and get back to you.