Not sure why this is causing me so much pain right now.

Essentially I want a docked window(for main navigation) North. Then when clicking a button, I would like to open a second docked window North, which sits directly below it. This is Navigation for that “sub area” of the project.

This opens both windows:

As it stand right now, the navigation its taking up the whole page, so I can’t see the home page.

You can’t open multiple docked windows on the same side in Vision, unfortunately.

As @PGriffith said you can’t dock multiple windows, but you can put multiple containers in the same window, and perhaps use some logic that determines which of those containers is shown, simulating having different “windows” in the same docked position.

@PGriffith very weird. When I hove over the ‘Dock Index’ I see: 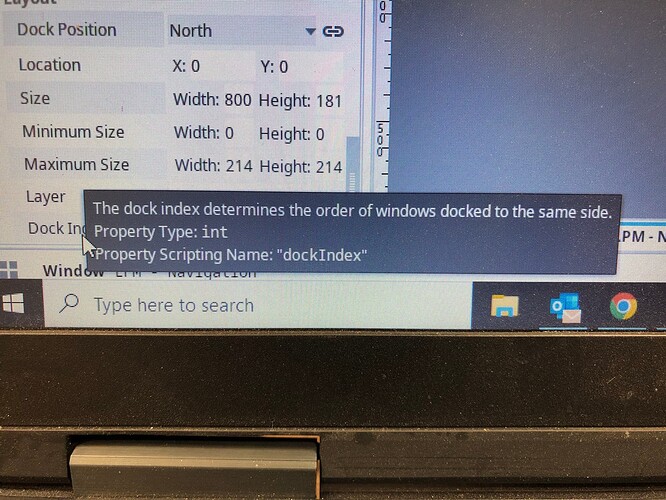 Which I feel is super misleading. And it is under the Vision documentation section.

@bkarabinchak.psi this an idea I thought about. But per my above post the other way ‘seemed’ doable. Looks like I’ll have to settle for a workaround with some visibility props.

Yea interesting, I don’t recall seeing a dockIndex property before, definitely have not used it before. Though based on it’s documentation seems like you’ll just see more and more windows cascading towards the middle of the screen? Or maybe you just have to close the previous docked window before opening up a new window on that dock? Not sure.

@bkarabinchak.psi I don’t know, I’m sure @PGriffith can elaborate. The tool tip and docs make it sound possible. Which is why I thought I could. It kind of states it pretty clearly I feel. But something isn’t really lining up at the same time.

I clearly haven’t done enough actual work in Vision for a while.

I’m absolutely wrong, and you can have multiple docked windows. Now I’m trying to figure out why I was under the impression you couldn’t… Possibly because plain Java Swing JScrollPanes can only have one docked component on each border.

As it stands right now, it’ll be hard to debug your actual problem without a project export… if you can share it, that’d be convenient, but if you’re not easily able to due to IP or other concerns, you can contact support and they can remote in to take a look.

@PGriffith Nothing IP about it. Just a sales demo essentially. But as I was about to export it, I tried one more time.

I saw a download button on a window I don’t remember being there. I checked the designer, saw nothing. Clicked around a few times and not it working perfectly. I really don’t know what happened, I was trying forever. And now it just works…?

I’ll monitor it, and if the issue arises again I’ll post the project.

It’s a common joke that as soon as you try to show someone a problem, it’ll immediately go away - so I guess that even applies over distance