I have a client script running once per second which checks for some serial comms via serial module, if the script finds a barcode read from the serial port it will write the barcode data to two tags. The script will work with no problems for a number of hours but then occationally i get an error as below

Can anyone suggest why thi shappens and if I could trap it.

The client must send the request to the server to write to the tag. If the client doesn’t get a response back within a read timeout (60000 ms by default) it will throw that error. It doesn’t mean the write didn’t occur. It just means that the server is taking longer than it should. You can suppress the error if you want by doing the following:system.tag.write("Path/to/tag", 15, 1)where the last argument you pass in 1.

However, that only hides the problem. You may want to see if there are times when the PLC connection gets slow by looking at the diagnostics. You can also increase the read timeout setting in the designer under Project > Properties clicking on Client > Timing.

Hi Guys, I am seeing the same problem with an Edge application.
Getting
Error writing to tag Refresh Rate.
Write timed out [c].

Seems to come in involumes of a few hundred erros when it does occur and then recovers itself.
Client memory seems good.
The script is firing on a tag change event, which is around the 200ms mark.
There is other script running as timer scripts at 1000ms and these are doing it also.
Seems to be a period where all tag writes are timing out.

Its only manifested itself lately which seems strange, however the client and the gateway lives on the same machine which is the bit I am struggling to understand.
It also happens when i run up a remote client also. 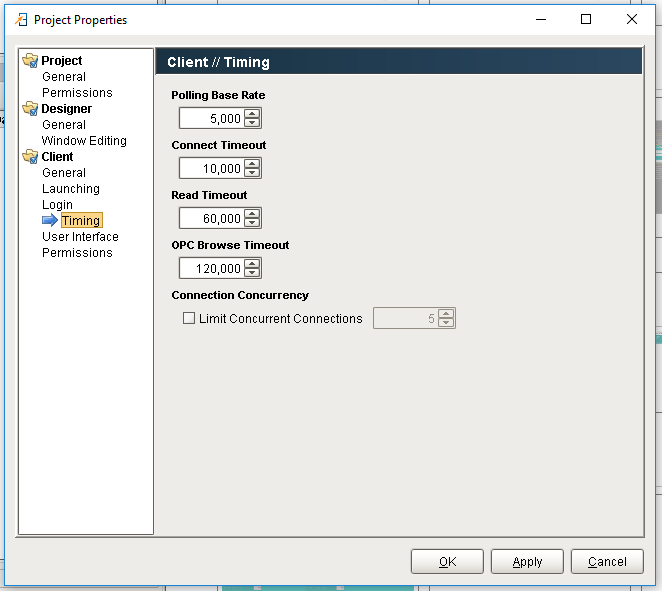