I’m attempting to utilize transaction groups to block tag changes together. We have 10 assembly lines and I want to track when a new piece has been counted or the part/job has changed over. I have created a Block transaction group in order to group these together (as well as a few other accessory tags).

I’ve setup the trigger to be whenever the “Total Count”, “Job” or “Part” tags have changed, but it’s being a bit inconsistent in how it decides to fire the trigger. 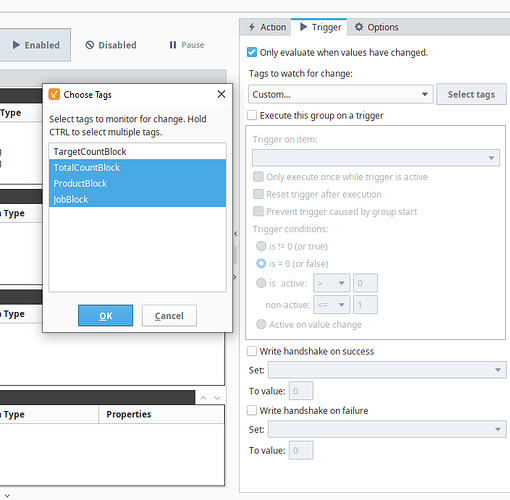 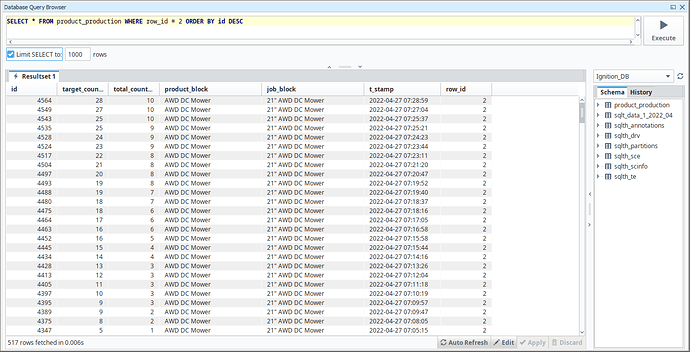 image1349×689 107 KB
Looking at just one production line (i.e. row_id = 2), it’s reporting when the target_count or the total_count chnages (even though target_count is not selected as one of the tags to trigger the group).

I would expect to see a new row whenever the total_count, product_block, or job_block changed values, but not the target_count.

Your setup looks correct to me. I set it up the same way on my machine, but it worked as expected. Was target_count accidentally placed in TotalCountBlock, ProductBlock, or JobBlock? Do you have any tags that are in TargetCountBlock that are also in one of the three trigger blocks? If a tag is in both, it will cause the transaction group to trigger.

Do I need to create a separate transaction group for each production line so that each line fires on it’s own respective “total_count” tag value-change?

In this instance, yes. Also, the separate groups will make it easier to store it in a wide format, in turn, making it easier for later queries against the table.

OK, I can see that. I guess I was hoping to have all of the data in one table so I can do a query something like “WHERE line = 1” and get all of the data for that particular line. Thanks for the help!

Nothing says you can’t. I add a column for the line/cell that is hardcoded for the group.

Example from my setup. Mine just arbitrarily runs every 10 seconds. Other values, like line number, efficiency, etc .are in the triggered expression items. 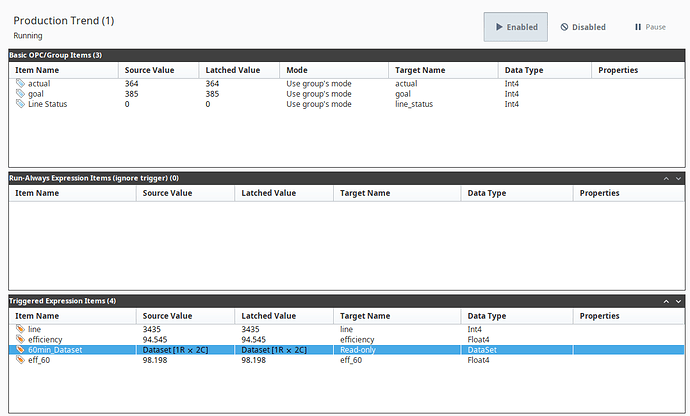