UDT not available in tag browser

I have a strange problem.
We have a UDT “General” which is editable in the UDT editor and all looks OK. 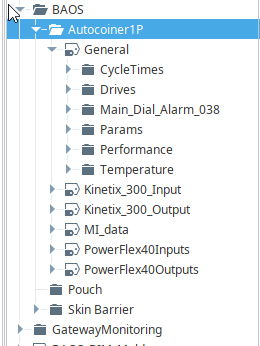 When I try to create an instance of it in the tags tree neither the folder nor UDT appears.

Can anyone suggest some checks or tests? Is our tag configuration corrupt?

I copied some of the UDT tag browser JSON into a text editor and found a couple of these:

In the end we renamed the offending UDT folder and recreated the folder structure and pasted in the JSON for each section after checking it for errors. The UDTs were still not showing up in the right-click menu. Stopping and starting the Ignition gateway solved the problem.

Note that when you rename a UDT or its path that any tags that use the original UDT have their paths updated automatically.
Update: I’m not so sure about that last statement. Some don’t seem to update the tags that use them.