I’m having a strange issue. We’re attempting to do our first installation of Ignition with Linux software. The server is running without an issue, and we’re able to launch the client remotely from Windows machines, but anytime we try to run the client from a Linux machine, even directly on the server, it fails to load. In the logs, we get HttpParser errors saying the following (I’m trying to get log files attached, need to find a way to make the file smaller or host it somewhere):

Anyone got ideas as to what the issue could be? The best I’ve got from a lot of internet searches is that something might be trying to use SSL to talk to a non-SSL server, but none of the settings on the gateway have SSL enabled.

What browser are you using? Are you accessing the gateway with an HTTPS URL instead of just HTTP?

We are using Firefox, we are not using HTTPS, just regular HTTP.

Are you sure you don’t have some policy or history making the URL have https in it? Can you try explicitly prefixing it with http:// instead?

When I add https:// to the URL I get the same error messages:

Can you try explicitly prefixing it with http:// instead?

So I opened the .jnlp file and sure enough, the javaws gateway address was pointing to both the non-ssl and ssl ports. I took the ssl port out and the client got further into the launch than before, but it then errored out with an “EOFException: null”. Any ideas on that?

edit: to clarify, i was already explicitly calling out http:// in Firefox when downloading the launcher, and the codebase in the jnlp file showed http: and the non-SSL port, only the following line had anything other than the non-ssl address and port:

Here’s a screenshot of the EOFException.

Is there a Java Console you can enable on linux?

On Windows it’s in control panel but not sure where or if there’s an equivalent.

I look in the launcher’s log file to see the final java command line that it runs to load the client, then run that directly in a terminal. Lately with the override to use the launcher’s jre. Then the terminal is the console.

For anyone watching, this issue was fixed by customer support! The issue ended up being that I corrupted the cache while I was experimenting with different flavors of java (oracle vs openjdk) which was causing the client to fail when it attempted to read the cache.Clearing the cache cleared the issue. A big thanks to Kevin Tran and customer support for their help!

Hello,
I got error: “EPFException:null” unfortunately I did not played with different java versions.
I have just one installation on 10 panels, and one of them ended with this error.
I use Raspbian on Raspbery PI. 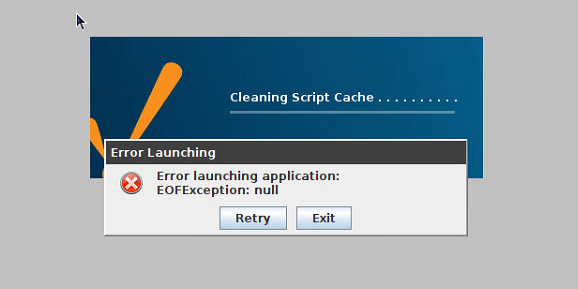 How should I fix this?
Thank you