I have a script that was failing to read a tag that was in a folder 2 levels up from the triggering tag (change event). I confirmed in documentation that I should be able to do this by using '..' twice:

Additionally, you can use ".. " (two periods) to go back one folder from the current relative position, for example [.]../../tag allows you to reference a Tag that is two folders up.

Is there something that might be causing this to fail that I am missing? Is there a different syntax that can be used here, aside from using the full tag paths?

I haven't built this folder structure out and tested this, but I'm pretty sure that you're second example is one level further than the path you were using.

[.]../writeMe is at the same level as the Layer 3 folder. [.]../../writeMe would be to a tag which was in the Layer 1 folder, however, looking at your screen shot, the second writeMe tag is actually in the Layers folder. I believe the correct path would be [.]../../../writeMe.

Unfortunately, I'm still unable to reach this tag after correcting the location. Please see below corrected structure and the script attempting the write: 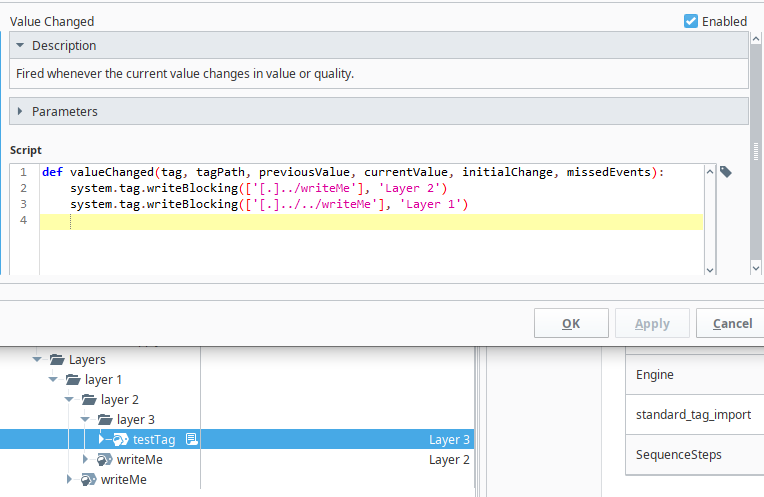 I'm not sure. I set up this structure on a dev gateway and it worked as expected. 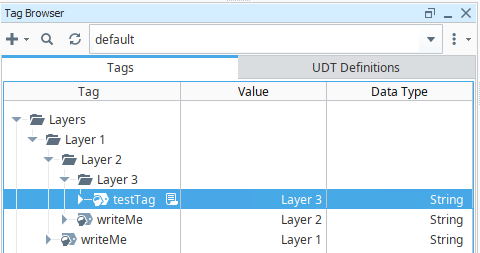 I will note, however, that the best way to write this script would be to combine the writes into one.

If you open the diagnostics view on the Tag Editor, is there any error reported?

Thanks again for your help Irose.

When I loaded the project this morning, this was working exactly as expected. I'm not sure why it was giving me so much trouble previously...