Just to make things clear:
You have a table that looks like

On click, you insert a row that contains only data.
Then, at some point based on a tag change, you need to update that row with actual_amount and end_time.

What do you use to identify the row to update ?
Couldn’t you wait until the tag change and push everything at once ? 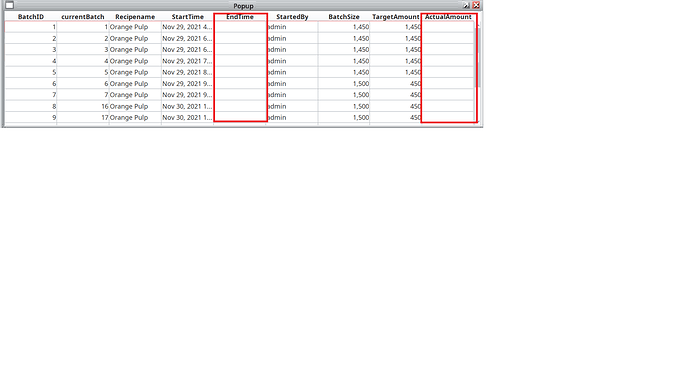 What does your query look like that is adding a new row instead of updating an existing a new one?

Why do you want to add the actual amount if it’s only ever added when it is equal to target amount ? You’ll have 2 columns containing the exact same data.

On your issue, I’d expect a runPrepUpdate() to do the work.
Can you share your queries ?

Hi,
below script is for adding actual amount.

and other one is i am trying with endtime.

i am trying two different script but both are not working.
As i am running batch 22 so it should send the data to row 22 of table like in above table.

One thing I notice is that your update statement does not have a WHERE clause, so that “UPDATE BatchInfo SET %d = ?” % (EndTime) will update every single row in the table every time it runs (if its even allowed to run, for example if MySQL SQL_SAFE_MODE=1, then you would be denied from running such a statement).

which is not what I imagine you want, since your column names are not going to be changing on every second to the current datetime.

If you really do want the full table updated, try this instead

I don’t think those queries are right. INSERT INTO will insert a new row, not update an existing one.
And, as @bkarabinchak.psi noted, the formatting looks a bit wonky.
I’m guessing you want something like this:

It worked lke what i wanted only where condition is missing which i have added and that satisfied my overall process.

Right, I forgot the where clause…
Glad it works.