Update progress bar from within a script 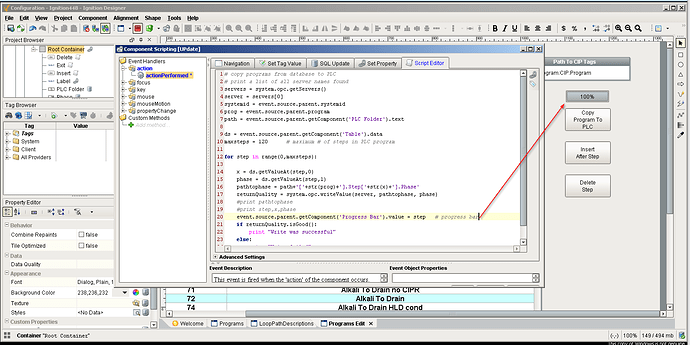 Sure, you can have a function that you run using invokeAsynchronous, and pass to it a reference to a progress bar component. Then use invokeLater’s to update progress bar (updates to the progress bar shouldn’t come directly from a background thread - invokeLater’s will get processed on the GUI thead)

You must not ever assign to component properties or call component methods from an asynchronous (background) function. You can really scramble Swing and/or deadlock it. Take a look at this thread for a discussion of possibilities:

I’ve got a script I am experimenting with that can take a lot of time to execute, so I now use the system.util.invokeAsynchronous to run the script in a separate thread to keep the GUI from locking up. I am using the asynchronous thread to copy files from one place to another, and I would like to show the progress of the file copy with a progress bar. How would I go about this? I am importing a few python libraries to do this. import shutil def fileTransfer(): path = system.file.openFile() …

A long-standing general rule of thumb, applicable to every GUI programming language I’ve ever used, is that foreground event scripts should never run longer that 1/10 of a second. Anything longer should be asynchronous. That would include any system.* call that might need to request something from the gateway. If you let events run longer, you will have user-notice-able UI freezes.

Resurrecting a bit of an old thread here, but am trying to use Async and InvokeLater functions and had a question on using them.

Here’s my code snippet. For this application, if the user navigates away and the script doesn’t finish, it’s fine, this is an on-demand batch report generation display, if they don’t wait for the report to finish, they just would need to come back and try again and be more patient! But ideally if they navigate away, I don’t want any errors popping up on the GUI when the async finishes in the background.

When a Swing object is held in a variable in a background or other task, and the Swing object closes or is otherwise deleted from the display, it continues to exist “disconnected” from the UI until all references are gone. In your case the component’s text properties will be updated, invisibly, just before the components themselves are discarded. If enough time has passed by the time they execute, those component’s parent properties would be null and other bindings/event routines discarded.

You can edit your posts. And you need to mark your code sections so they format properly (with indents). Use triple back-quotes above and below your code. It should look like so in the post editor:

Thanks for the feedback, on the code (and on posting).

So it sounds like I shouldn’t get any errors after navigating away, at least any due to the Async/InvokeLater functions. While testing my display, I was pretty sure I was getting some errors when I navigated away but not when I stayed on the display, but I haven’t been able to reproduce them, so might have been unrelated to the Async and a typo in a reference.

I was pretty sure I was getting some errors

Well, any components passed to the async script will be present, but if you try to look up other components in the later script, they probably won’t be there. That can generate errors. try...except... is your friend. (: