On installing new version of ignition say 1.21, it says designer version is old 1.17 and asks to upgrade. When, I download the new designer and try to install, it says some applications need to be closed that are using some java files that need to be replaced , when I allow it and proceed it gives following error 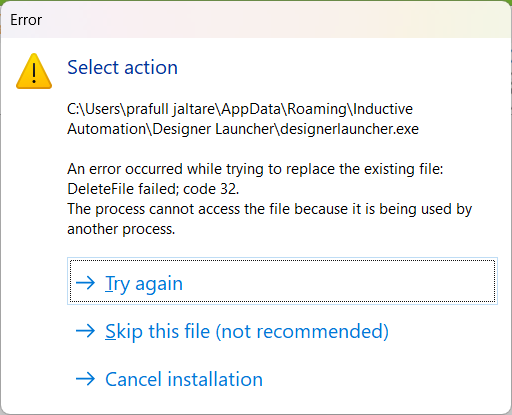 On ignoring (not recommended) it stops at a next point. What could be causing this error and how to proceed with upgradation? I have even stopped Ignition application from running. Even while running as administrator the error continues. How to know which process is using which file so that we can stop that process.

do you have the Designer Launcher open currently? If so close it. I would check in Task Manager and not just looking for any open windows.

Thanks for the reply. I have stopped ignition and there is no designer instance open. I have closed all open windows as well. I did try to check the Task Manager, but don't know which process is using JRE/JDK files! It shows there are 4 Apps, 86 Background processes, 96 windows processes running at the moment! Should I restart the system once?

Yesssss, restarting the system worked! Thanks for the tips.