I upgraded to 8.0.15 and found that some of my datatypes had lost all of their internal data and are just showing their parameters. Has anyone else experienced this issue? 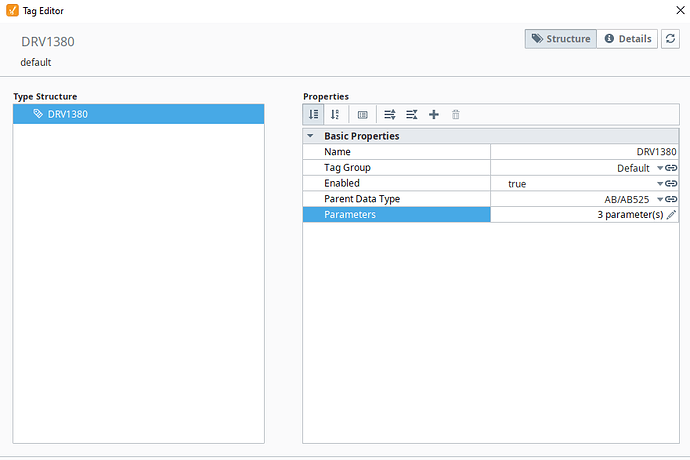 How did you upgrade? Did you run the installer over the 8.0.14 Ignition, or did you install a fresh 8.0.15 and restore the backup?

I just did the latter and still have all datatype tags.

I ran an upgrade, I can run it back and try again doing a fresh install and restoring the backup though. How do you save your tags, does the backup cover that?

Before resorting to reinstalling - what happens if you right click on the DRV1380 UDT and select “Restart Tag”, does it fix the UDT?

I just tried and restarting the tag didn’t seem to fix it.

Can you attach an export of your tags?

If anyone else has this issue in the future: James and I private messaged and exchanged tags and he found the issue:

I believe I’ve narrowed down the issue, which revolves around the TagName parameter, and the fact that it is one of the 4 pre-defined parameters that is used by Ignition:

It looks like in previous versions (based on limited testing) that if a user created a UDT parameter called TagName , and then attempted to reference the TagName parameter in a tag, we would just ignore it and fall back to the value of the pre-defined parameter. However, due to changes in 8.0.15, we attempt to overwrite the built-in value, which causes an error that breaks the loading of the UDT.

We’ll get a fix in so that if you happen to use a parameter name that matches a pre-defined parameter name, it doesn’t affect tag loading, but I would advise against such parameter name clashing in the future - at the very least, it should eliminate confusion as to which value the parameter evaluates to.

After looking at the UDTs in question we found out we weren’t even using the TagName parameter and were able to remove it properly. After that the tags worked fine and all of their inner tags showed up.