This one might be a bit tough for me to describe. I was reorganizing some components that I pasted into a column layout. I was trying to move one to the top right corner, and went off the screen a bit. The designer then locked up for a minute, and now my console is getting flooded with the following error.
I’ve posted a screenshot below as well. Not sure what else would be useful in troubleshooting this issue. 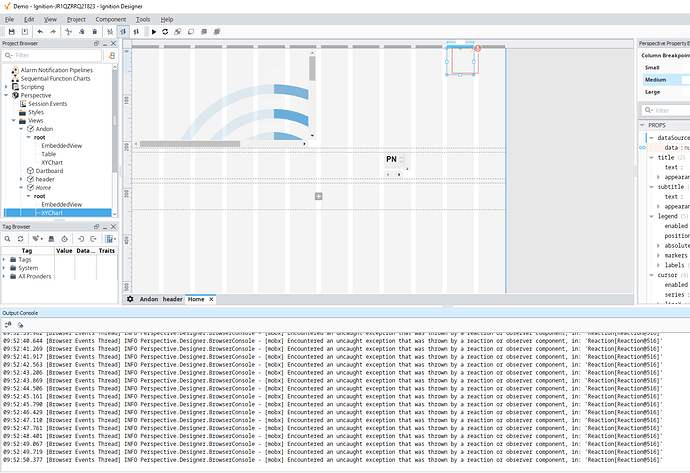 Are you able to send in a project export or view export? If you’re able to save in that state, that is.

Should have thought of that. Forgot to try and make an export. The designer was kinda struggling though so not sure if it would have let me. I just tried re-creating the issue in the same project with no success.

Was trying to do something similar again today, and ended up getting the same error. The view in question this time is Andon. I was moving components in a Column Container, and the designer locks up and gives me timeout errors while the console fills with messages like I mentioned above.

Edit: Project backup doesn’t seem to have saved the screen as it was. And anytime I hit save or merge it throws a TimeoutException.

The project backup doesn’t have it, but I’ve managed to recreate what seems to be triggering it every time.

What is the memory usage like? Since it involves the XY Chart, it might be the same bug as Perspective XY Chart causes javascript endless allocation, race condition? if it’s continually increasing.

I didn’t look at designer memory usage, but the gateway was still pretty low while the issue was occurring.

I was able to duplicate the issue and have created a new issue for this. Thank you for providing duplication steps. This looks to be an issue with the library we use to manage the state of the components.