I’m trying this in v8.0.9 and is still the same…
When you change the button’s background to anything else than default color (250,250,251), the button loses the visual effect of the button and doesn’t look like the button anymore.

ButtonBackground1597×906 691 KB
For something basic like the button, I think this is going for too long. Why?
Upgrade version makes buttons dissapear (possible bug?)
Ignition 8 - Button loses the visual effects
PGriffith March 13, 2020, 4:42pm 2

Give the background color some transparency/alpha.

Due to the way the new look and feel works, buttons with vibrant background colors were appearing ‘muted’ upon upgrade, which led to complaints on the forum. So we (essentially) hardcoded thing so that a button set to a different background color with no alpha will render with just that color. As soon as you give the background color some alpha, we’ll go back to using the new look-and-feel’s rendering code, which does preserve the mouseover effects.

backgroundButton21390×858 1.08 MB
It really doesn’t work until you give around 50% alpha.
And then the background color is not the color you choose but something… ‘muted’…
There are many situations where you need different background colors on the buttons and this is not a viable solution.
Are you (IA) plan to do something about it or are we stuck with this?
PGriffith March 18, 2020, 3:48pm 4

) are looking into whether this can be improved; we’ll check back with this thread once a decision has been made.

I discovered the same issue after migrating from 7.9.13. This is a bug in my opinion that needs to be fixed. PGriffith, you mentioned that development was looking into this. Any idea on when there will be a solution?

A temporary solution would be for someone to add a 3D button to the symbol factory that works properly. There are two buttons in the items list but they don’t work the same. Anyway, who maintains the symbol factory items? I haven’t seen anything new in there since I started using ignition.

Any idea on when there will be a solution?

Symbol Factory is an off-the-shelf product that we essentially just drop directly into Ignition to make available. There are some new things coming to Perspective re: symbology “soon”, but they probably won’t come directly to Vision.

“No. no timeline” isn’t a very good answer. Are the developers working on it?

“No. no timeline” isn’t a very good answer

Do you think this might not be entirely on IA?

“No. no timeline” isn’t a very good answer. Are the developers working on it?

I understand your frustration, but I literally can’t provide a more specific timeline than that. I can’t even guarantee changes will be made at all. I can tell you it’s been assigned to a particular developer for investigation. That doesn’t mean they’re actively working on it, or when they will. Hence, no timeline.

Also, I’d argue that an honest response from a developer within a day is a pretty good answer.

You could also make your own button, template. It’s not hard to do and only takes a few minutes. Then you can make it just the way you want. You are the developer and you can yell at yourself.

This is a known issue which has been confirmed by IA support and according to them development is “supposedly” going to fix it. I have an open ticket with support regarding this issue to remind them. I think more people should complain about this so maybe it will get fixed

Like zxcslo said earlier in this thread the workaround PGriffith suggested doesn’t work either. I tried that too.
However I came up with a better workaround. Try this… (Note: this example is using my button named OverView which has a blue background)
Add a background color change script to the mousePressed and mouseReleased events for the button. For the Pressed choose a darker or lighter color. For the Released put the color back to the original background color. This is the script

Screenshot of the events you need to add. 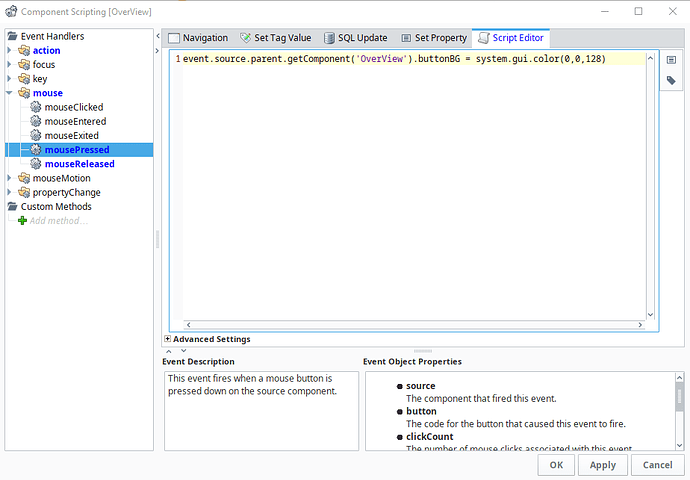 The cool thing about my workaround is that you can pick a completely different color when you press the button which really pops!

Same in v8.0.15 RC1…
It seems that the Button component is not so important … users rarely use it and change the background of the button even less often …

Yes, but as you said earlier…

I really don’t understand, why this ‘issue’ is not resolved yet…
Button is THE essential component in every GUI…

FYI, each version has release notes that you can browse through to see what is included. No need to install a new version just to see if they fixed a bug.

But, I feel your frustration… I’ve been waiting since January on what I felt were simple fixes.

For this specific case, you could try making your own buttons. On mousePressed:

You could also do a border instead of color. On mousePressed:

Yes, I know all that, but like @r.popeszku said:

And he ended up doing something similar. You really have two choices, wait, or do a workaround on your own.