I am having trouble trying to figure out high level how to dynamically set the number of instances of a flex repeater and how to set the values within each instance. Lets say I just have a Label (text) and a Value (integer) I want to pass into each instance of the repeater. On the template of what I am using for the repeater I have two parameters coming in called Label and Value. I have a flex repeater. What is the next step? Would I go to a binding on the instances and then select something like an expression or an expression structure in order to set the number of instances and set the values for each instance. This is the part I am getting stuck on. In vision I know you can do something similar by using a custom method to write the script and then run the script from the component but you can’t do that in perspective so I am just wondering high level how to start on the right track.

I am also getting the Label property from a named query and this part will be dynamic based on how many rows of the table I am populating Label with. I can correctly bind the instances to this named query and return the correct number of instances along with the correct label per instance. Now I want to populate the value field per instance reading in tag values. How would I actually combine the two together? I cant get the value of the tag from a query so what am I to do?

You’ll want to bind against some sort of driving data (usually a query), and then include a transform. The transform should iterate over the results of the query and generate a list of objects, where each object contains the keys your instances will expect.

This is the general format you’ll want to use:

It’s very likely you’ll need to adjust the logic to properly iterate over a dataset, but your goal should be an array of objects where each object contains case-specific matches to the keys you have specified as params for the target View. The returned instances array is what will determine the count of instances.

Now I want to populate the value field per instance reading in tag values.

This part right here actually seems backwards. If the “value” of the instance is derived from the value of the “Label”, then why are you passing it in as a param? Have you considered ONLY passing the Label, and then allowing the View itself to determine the value of your “Value”?

Well what I mean is there is a number associated with the label in the database. Then this number is used in the tag path to get the correct value. So do you mean if I can also pull this number along with the label value into each instance, then somehow use the number within the instance to use indirect tag addressing to get the tag value I need?

If they’re both coming from the same query, then yes.

If your query is something like select Label, Value from my_table, then you can iterate over that like I demoed in my previous post and send both values along. Then, inside your View which is being used in the Flex Repeater you can just bind a Label with an indirect tag binding where you supply the Value param as the interpolated value.

If you need to manage the order, then yes - you would need to do that within your transform script.

So I have figured out how to create the instance that I want. I am reading in the tag values and have put them into their own datasets correctly. I now want to use those datasets to fill two of the four parameter instances. I am having two problems now. One is I cant seem to access one element within the dataset so each parameter instance ends up giving me the entire dataset for each instance. The second problem is while the dataset itself is showing just the value, what actually shows up on my screen is the entire tag including the value, quality, timestamp, etc.

To access the datasets I have tried using getValueAt(row.Number, 0) and that gives me an error. I also tried converting to a pydataset but that won’t work either.

Here is the code that works but still gives me the two issues above:

Ok I think I figured it out. I can use row.Number to access the different elements but I had to subtract 1 from it. The dataset is 0-7 but the machine number index is 1-8.

The adjusted code temperature and operation is:

Do you actually want the flex repeater rows to show static-in-time values of your tags at the point in time that you run the transform script (which is how your config will currently work) ? Or do you instead want these to update as a binding to the tags would?

Actually good point. I can still use the ‘Value’ number to give me the correct reference to the tag I want to pull. I did want to do some sorting based on the Operation parameter so I still wanted to include that in the transform as a way to get the value and do a system.dataset.sort.

I put this line in to sort:

How do I sort a list of dictionaries by a value of the dictionary?

Copied for ease:
The sorted() function takes a key= parameter

I also tried and this worked also!

I got good lesson from this question!
Please note that set ‘Return Format’ to ‘json’ if you want to transform your data. 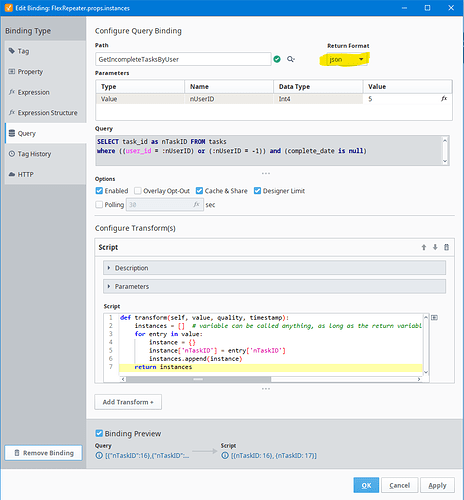 How would we do it if we want these to update as a binding to the tags?

If the tags are fixed and there aren't too many of them, a structure binding.

If the list of tags is long or dynamic, have a list of paths stored somewhere, use a structure binding where one binding is on the paths list and the other one is an expression using now to trigger a refresh at fixed intervals.

think I understand the first part regarding the paths list, but using now to trigger a refresh at fixed intervals?

I think. I never used that method.