[Feature-15996] Ignition Launchers use ~/.ignition instead of AppData

In our environment when a reboot occurs everything in the user folder is lost except the users home directory folders AppData, Documents, Desktop, and Photos.

The only alternative is to use the redirect.txt file in the user home dir.

I don’t know if the launchers actually look at that, though…

The launchers don’t support this directly, however you can place a clientlauncher-data folder next to the launcher executable and that will be used instead of the one at ~/.ignition/clientlauncher-data. If you did that coupled with the redirect.txt file should get you out of the .ignition directory.

edit: I did open a ticket for the launchers to respect the redirect.txt file as well in case that is easier than setting up a pre-packaged launcher

I did not know about the trick of putting the clientlauncher-data folder next to the launcher executable. I will try it out.

Having a clientlauncher-data folder next to the visionclientlauncher.exe does not seem to work. I tried it with ignition version 8.0.7 which is vision client launcher version 1.0.7. It still recreates a .ignition folder in the user home directly and sets up a new clientlauncher-data\vision-client-launcher.json file.

So it looks like on windows its looking one directory up. so clientlauncher-data would be next to the Vision Client Launcher directory (The top level install directory). This is not intended and I have a fix pending that is targeted to make it into 8.0.9.

There are a couple of options for deploying this launcher in a more global scope for users etc:

It looks like an MSI version of the launchers is what you are ultimately looking for. I would head over to https://ideas.inductiveautomation.com/ and see if there is currently an idea submitted for this, if not you can create one

. If it gains enough traction we could look into it and prioritize appropriately.

Im sure there are other users on here that may have other suggestions as well.

Getting closer. Now with the clientlauncher-data folder in the right spot with the json file, the launch opens up with the list of apps without having to have the json config file in the users .ignition folder. Now I am running into an error when I try to launch a project.

Shouldn’t it be looking in the same place as the json config file is and not my users folder?

Yeah this doesn’t look right. It appears that the relaunch doesn’t know where to look for the required jar. Looking through the codebase its not obvious there is a way around this. I just opened a ticket for this

Yeah this is a known issue and a fix is pending. It’s gone through review and is going through QA testing at the moment. It should be available in the nightlies shortly

@PGriffith Thanks! Fix is working for me.

If this is the case, then it seems the name of the folder doesn’t even matter anymore just that all the configuration and needed files are in the same folder for the 8 launcher. 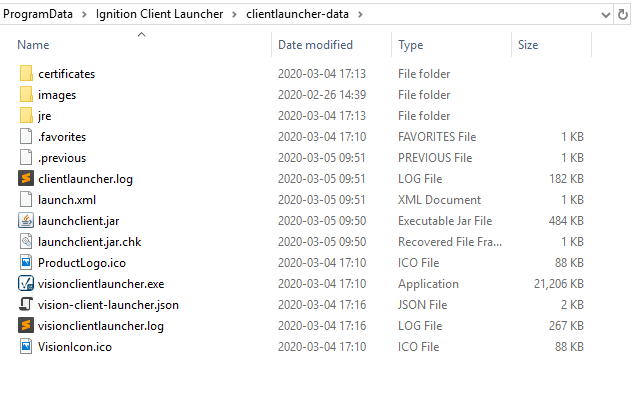 @ryanjmclaughlin sorry for the delay,

You should just place the clientlauncher-data directory inside the install directory next to the executable and jre folder:

When launching, you can check the *launcher.log file to confirm that its pointing to this directory.

As an point of wisdom from my failures to others… if you are doing your own custom install make sure you allow all users write access to the clientlauncher-data and jre folders (In 7.9 only needed the clientlauncher-data folders) because the new launchers make changes to the jre for updates and ssl cert imports that will fail if the user running the launcher cannot write to the jre folder.

Hi,
Facing a similar issue here Separate post for clarity
I put redirect.txt on .ignition/ directory, it managed to move away from the .ignition directroy for creating clientlauncher-data to the desired location. However, it still tries to extract chromium related files in C:\Users… . Is there a way to redirect that as well to a location where running executables are not blocked by groupd policy.

I’m pretty sure you are going to need an administrator to install the launcher and its executables for “All Users”. See this topic:

Well the launcher was indeed installed by an administrator, however the Chromium binaries were extracted into a default C:\Users… Supplying addtion JVM parameters solved this problem. Here I found my solution

Hi there!
Vision 8.1.2 -
In our environment you can’t run apps from the user folder. Group policy blocking client start: 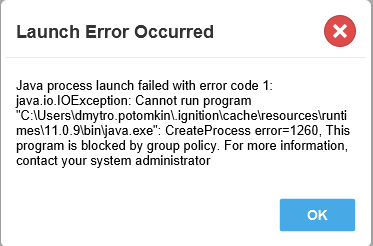 We test solutions from this topic (move catalogs .ignition\clientlauncher-data and AppData\Roaming\Inductive Automation\Vision Client Launcher\ into another place) with no luck

This forum is not an official support venue. If you need prompt help, you need to actually contact our support department. https://inductiveautomation.com/support/home/