Before I start I have to say that I have been at this for 30 years going back to programming PLC2s, PanelViews with DOS, using DMACs on a 286. WinCC, WonderWare, I’ve used them all over the years. I’ve programmed in everything from Turbo Pascal to JavaScript, to Julia. (I have to admit It took me a long time to get my head wrapped around programming in LabView). Ignition has been like a dream come true. Easy access to PLCs, databases, programming in a “real” language python with full access to tags and to SQL. Everything has been very intuitive until now.

I have to say my first impressions of 8.0 are horrible. I understand this is beta but my experience is really bad.

Designer:
The theme makes it unusable. I do not see an obvious way to change the theme.
Text:

UNINTUITIVE!!!
I can’t figure out how to do simple things like bind to a tag!! Drag and drop doesn’t work as expected, cut and paste doesn’t work as expected. The source editor doesn’t have the link buttons for properties or tags. How do you bind??? I finally found the little link icon next to the property but it is invisible, again because the contrast of the default theme is so low. But I still can’t figure out how to bind to a tag history on a chart. I copy the tag path and paste it into the “path” property and it doesn’t work!

Several tooltips are unreadable because they are black text on a nearly black background. Don’t you understand the concept of CONTRAST!

I think I have to uninstall it and go back to 7.9 for the sake of my sanity, blood pressure, and eyesight.

Conclusion:
In it’s current state 8.0 is totally unusable. The designer color theme renders everything including vision screen development impossible. With my screen resolution reduced to increase the font size and the contrast on my monitors turned to the maximum my eyestrain is intense. I would like to know what type of monitors and lighting conditions you use.
Perspective development is extremely unintuitive and after several hours I still can’t display a simple tag history chart. Something I was able to do in minutes the first time I used Ignition several years ago. The manual is probably 10% complete and pretty much useless. I expected a sharp learning curve but this is a brick wall.

I see great potential here. HTML5 is definitely the way to go. I’m confident that Inductive will solve these problems.

Well, for everyone who has been begging us to release the beta even earlier, I’ll be happy to point them to your post as a counterpoint.

Okay. You packed a lot of stuff into this post. Let’s try and work through it.

I was surprised to hear about your theme / fontsize / font alias issues. This seems very odd to me, as one of the primary reasons of moving to this theme was to increase font readability and performance on high dpi monitors. Obviously something has gone quite wrong on your system. Let’s work on this issue first, please. Can you give us some details about your monitor setup? Screenshots of what you’re seeing?

I’m also quite surprised about your experience with the designer launcher. It certainly shouldn’t be the case that it is sensitive to your existing java installation. We’d like to get to the bottom of this one. Can you walk us through the steps of what happened and what you observed while trying to use the launcher?

Let’s get to the things you found un-intuitive after we get through these more basic issues first. Nothing is going to be intuitive if you can’t see!

What OS is your Gateway on?
What OS did you launch the Designer from?
What are the dimensions of the display you have your Designer on?
Is any of this being done on a Virtual Machine?

Please remember that Perspective is entirely new, and some parts of Ignition have been re-imagined. Due to this, it’s important to brush back up on the documentation. Some of your concerns - such as the process of binding - might be less of a concern after transitioning to the new methodologies.

Carl didn’t address your note about the contrast on tooltips, but this is a known issue and one that should be fixed in one of the upcoming nightly updates.

One last request would be for screenshots of the designer/areas you are finding difficult to read. We use a lot of different OSes/Monitors/Devices as part of routine development as well as testing, and we have not seen the contrast issue you are reporting (tooltip styling aside, which is already being addressed). Some images depicting what you are seeing would help us understand the issue.

That said, thanks for your report. Hate to see someone have a bad experience, but this sort of feedback is very useful to us.

I’m sorry I was so brutal but I found it very frustrating.
I’m running the gateway and designer on my laptop using Windows 10.
I have 2 24" external monitors. They are different models but they are both Samsung.
I tried all the monitors with different setting for brightness, contrast, viewing angle, etc. But the contrast with the color theme is always straining to the point of being unusable.

How do I bind a tag history to a chart? Nothing I do works. Explain it to me. Show me an example. Don’t just point me to non-existent documentation.

Explain it to me. Show me an example. Don’t just point me to non-existent documentation.

Dude, this is a private, early beta. Documentation is expected to be nonexistent. Features are expected to be missing. This isn’t a training exercise or a marketing presentation, it’s an effort to make the future of Ignition as awesome as possible as early as possible. Please just report the problems (like contrast & scaling) so IA can track them. Drop the histrionics, or wait for a release candidate.

Well, for everyone who has been begging us to release the beta even earlier, I’ll be happy to point them to your post as a counterpoint.

I’m sorry I was so brutal but I found it very frustrating.

That’s fine, we don’t mind the feedback. I understand it probably is frustrating at this point. That’s why we wrote this in the intro doc:

… you should understand that Ignition 8 is still in a very early, unstable, and incomplete state. You will notice right away that some features detailed at ICC are not in the build yet. You will also notice that some things might look funky, half-broken, or worse. Don’t be alarmed! This is just part of the process. If this frightens you, you probably should wait for the RC

That said: if your feedback is going to be helpful to us, we need to be a bit more methodical. I really want to figure out your issues with the UI / contrast / font stuff first. Can you please post a screenshot demonstrating the unreadable text?

You are absolutely right. I’m just getting over frustrated trying to do something that should be very simple. I fully understand that this is a very early beta. I know these guys know their stuff and I’m sure they will fix it. I apologize to everyone but I do have to say that this beta gave me a very bad impression. I also have to say that I have used software from other vendors that was supposed to be “production” that worked worse than this beta.

I wish to apologize for my outburst. I wrote down a live list of notes I had and should have rewritten once I got over my frustrations.
I doubt a screenshot will help much. I have a 1920x1080 24" monitor and the text size is pretty small. The softer color theme made it worse. I reduced my resolution and it was a lot clearer but I lost a lot of screen real estate to menus and panels. The ability to change the color theme and/or font size would be nice.

A few other minor quirks need to be polished like when I turn on a tag’s history the dialog keeps jumping back to the top of the list and I have to scroll back down to finish setting up the tag. A few other dialogs act similarly particularly when a selection causes the size of the list to change.

This is going to be a great product as it matures.

I doubt a screenshot will help much.

What I’m trying to determine is if we’re looking at the same thing or not. Since you don’t want to post a screenshot, how about I post one, and you can tell me if it looks the same as what you’re looking at: 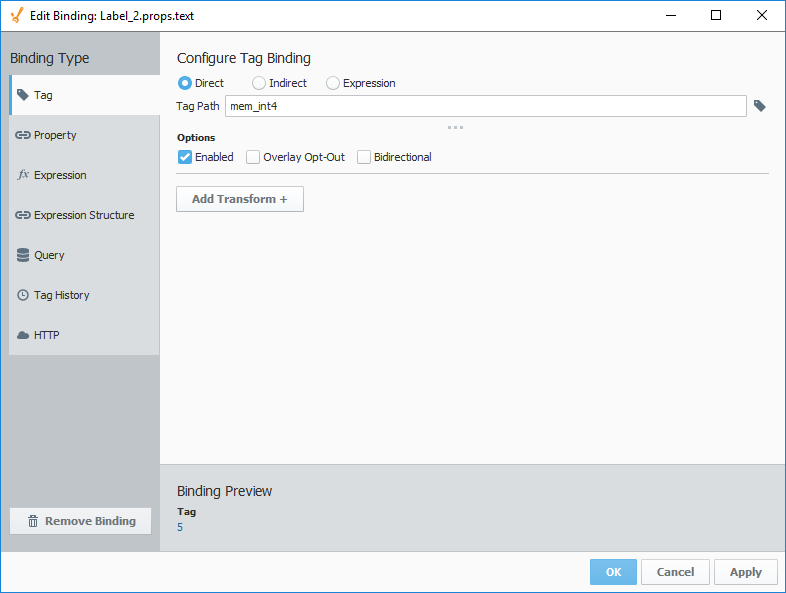 I have been happy with what I have seen so far. I know it is early and you guys are not finished, but impressed with it so far. One thing that might help people, would be access to a demo project with a few things done in it for examples.
Keep up the good work, like what i have seen so far cant wait for stable version. I have built a couple pages so far just getting us to where everything is now. Also at the end of the day we should be happy you guys released it early so we can have some input on the finished product.

@brianboudreau I think this is the demo you are looking for. Should find some video tutorials in the demo too. Edit: Sorry just realized that you meant access to a demo in the Designer…

One thing that might help people, would be access to a demo project with a few things done in it for examples.

Yes, this is something that we’re working on.

Thank you for all the great work you guys do at IA!!! 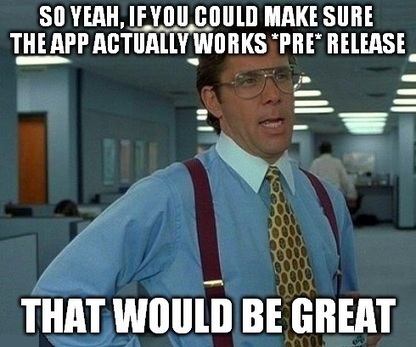 I spent more time playing with different monitors and settings. I found the problem is that it looks OK on a LED monitor but on a LCD monitor the blue and green text has pretty bad contrast the proportional font of “Add Position Property” makes it worse. On one of the LCD monitors the grey “{1}” is invisible at most angles and barely visible at the best angle, on the other LCD it is barely visible. On the LED screen it is visible but still somewhat straining to my eyes. I tried changing the brightness/contrast/sharpness settings on the LCD monitor but still could not make it so it wasn’t straining my eyes. I have never noticed a difference between the LCD monitor and the LED monitor using Ignition 7.x. 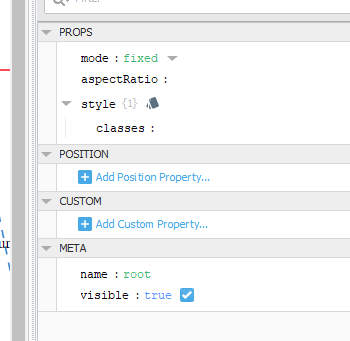 Can you get us the make/model of the monitor that it looks bad on? I guess we’ve never noticed this, as it looks pretty good on all the monitors we seem to have in the office. It might just be a matter of tweaking colors to improve contrast, like you said.

One thing to try - if Win 10, check your display properties and “scaling”. There appears to be a bug (which IA is aware of) when set different from 100%. My laptop was set to 150%, which caused images and the layout to look bad and cause problems.

Does setting to 100% correct the visualization issue?

My 1st impression is pretty favorable with the understanding this it’s still very much beta.