I have been implementing additional languages into the program and as I do, I’m noticing major slowdowns in loading times, even when it’s in English. This is especially true when it comes to
the use of system.util.translate. Has anyone else been having this issue? Is there a way to fix this or a workaround that anyone could suggest?

Can you expand a little bit more on exactly how you’re using system.util.translate? Most Perspective components should automatically translate displayed text for you, and I’d expect that mechanism to be a whole lot faster (no roundtrip to the gateway is required).

that are several string concatenated and the different parts need to be translated. WO gets changed to 工作指示 and Boxes is changed to 盒子 for example.

Here is the code being used in an expression structure binding.

EDIT: I forgot to mention this, but before running both tests, I cleared the cookies and did a hard refresh.

On a side note; if you try to use a string formatter ('{:s}'.format(units)) to format Chinese characters, it changes it from 盒子 to çå­. This is not an issue on other python interpreters, but it is here. I don’t know if it’s a jython bug or an Ignition bug, but that took me WAY too long to figure out. It doesn’t happen with Spanish so I am thinking it is just an issue with non-alphabet languages.

You will just have to use the right encoding.

idk why its slowing down your screen so much tho.
Does this happen if you use the exact same script but comment out the translate and just use the value.wo ect? instead of system.util.translate(str(value.wo), locale)

if product is not None:

Also i see no loop in here… are you translating all the data at once(you should) or on every label?(thats gonne be a lot of communication with the gateway)
Maybe its worth generating the data in a dataset tag and then create a translated dataset tag for each translation you have and dynamically grab those(and default to english if you find no translation). that should basicly eliminate any slowdown in the client, just a bit of more work for the gateway at first (but less the more clients there are) and a bit more memory used

Consider pre-translating all necessary static words into private session custom properties, where the translation is triggered only by changes in the locale. Then the heavily used expressions and transforms can simply reference {session.props.custom.translated.wo} or {session.props.custom.translated.pc} in a simple stringFormat() expression. (Bonus is that will avoid jython’s string interpolation in favor of java’s.)

(Possibly use an expression structure to generate session.props.custom.translated.* in one go.)

Yeah, unfortunately there’s a weakness in our implementation of system.util.translate here - the function can’t simply ask the gateway for a specific term, it has to load an entire ‘translation package’ (containing all your defined translations, across all locales) and then retrieve your single element. Every single call to system.util.translate is doing that.
You can use a script like the one I posted here to ‘bulk’ translate calls into a single roundtrip (and a single fetch of the translation package), or you can look into precalculating/caching translations in session properties, or you could use a modified version of the script I linked to cache the TranslationPackage in a top-level script constant.

I think we can make these functions a lot smarter so that workarounds like my other post aren’t necessary, so I’ve made a ticket to investigate this further.

So I’m working through the code in the example you linked and it’s not returning the translation.

In the Translation Manager, I added:

I set the language to zh-US:

I ran the code: 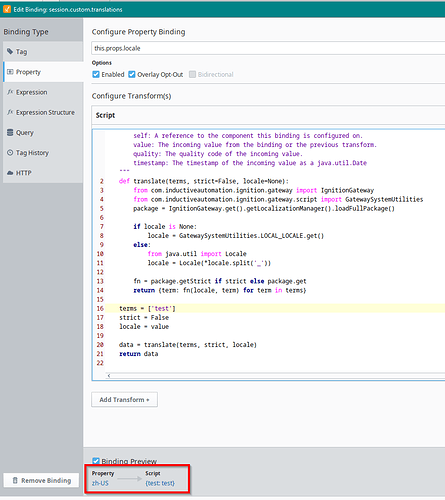 But it just returned the key that was passed in instead of the translation.

Changing locale = None had no effect at all.

Also, is there a way for it to just pass back the entire list of terms instead of me having to pass them all in manually?

Also, is there a way for it to just pass back the entire list of terms instead of me having to pass them all in manually?

As for the script not working, you’re splitting on underscores but supplying a locale separated with hyphens.

You could try using the following class to transform a string into a locale, regardless of format:

I was having this same problem and after a little back and forth with Peter Lo from the Software Support Team, he addressed me to this topic.
I’ve tested the translate function you posted in the other topic and it works way better than system.util.translate. For example our project has gone from a 10 seconds delay to translate the elements of a drop-down list to about 2,5 seconds: it’s still quite a lot, but way better than before.

I’d be nice if this issue can be addressed in the next releases of Ignition, 'cause it’s pretty common to have to support more than one language and this weakness in the implementation of the default function is a big issue.

May I ask for a code snippet showing how to use getAllTranslations? Thank you.

I’d be nice if this issue can be addressed in the next releases of Ignition, 'cause it’s pretty typical to have to support more than one language and this weakness in the implementation of the default function is a big issue.

This is being treated as a pretty high priority issue and is expected to be picked up and worked on within the next ~4 weeks. If that does happen, this could go into 8.1.13. I would not rely on that, but that’s the best case scenario.

May I ask for a code snippet showing how to use getAllTranslations ? Thank you.

Possible something like this, where you supply a locale and get a plain dictionary of terms : translations in return:

if you try to use a string formatter ( '{:s}'.format(units) ) to format Chinese characters, it changes it from 盒子 to çå­ .

On Python 2 strings are not Unicode, so in some cases I have added the following import statement to overcome that:

Or prepend the str with a u:

Either way should work, but I prefer importing unicode_literals just so I don’t have to prepend all my strs wit th u"".

Hello @PGriffith.
I’ve taken a look at version 8.1.13 changelog, but I didn’t see any update on this matter. Have you got any news about this issue?
Thank you!

No. Unfortunately, like I said, that was a best case scenario. The code changes haven’t happened yet, so at this point the earliest release with them would be 8.1.15; 8.1.14 is ‘frozen’ as the release candidate just went out.