Just updated to 8.1.15 which solved an issue I had. So far, so good. Now I just found a new issue that is pretty easy to recreate.

Tagpaths that contain non-standard letters shows up as “not found” in an Embedded View. Seems to only effect the Designer and everything works when running the project. 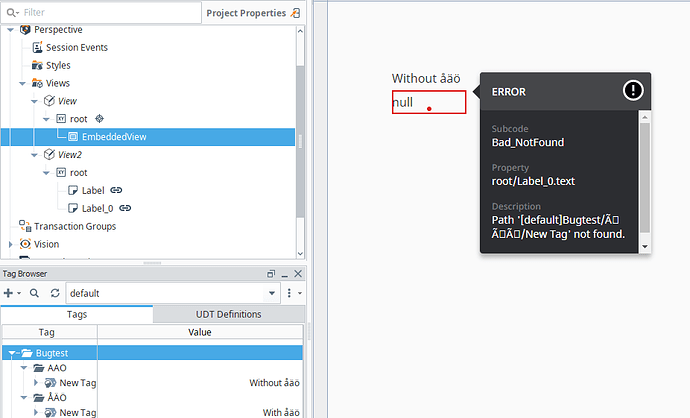 Can you share more about how you have things set up?
I wasn’t able to readily reproduce; I created a view with a tagpath input parameter, and a label with an indirect tag binding. I embedded that view and set the path parameter, and it worked as I would expect it to.

Label and Label_0 in View2 are bound to the 2 tags you see in the tag browser.

EmbeddedView in View points to View2.

That’s it. No params or anything.

It’s not the value of the tag that is the issue, but the parent path.

Hm, I wasn’t able to reproduce, but I’ll ask someone from QA to take a look.

QA was able to reproduce. I can’t tell from your screenshot, but are you using the designer on a Windows machine?

I’m sorry for the sparse info in the first post.

Nah, no sweat. Thanks for the report! My guess right now is that it’s a problem with Window’s default encoding. You could try setting -Dfile.encoding=UTF8 in your designer launcher JVM arguments. I won’t guarantee that’ll fix it, since I don’t know where the actual problem is, but it might be worth a try.

I’ll just have to keep in mind to ignore these errors till it’s fixed. As long as it works when using the projects we’ll manage =)

Wasnt there something about the first letter of the tag having to be “not special”.
There have been some posts about this before idk

Here is a link to characters that are invalid in tag names. There is no way to ‘escape’ special characters in tag paths. To expand a little more - the first character in a tag/folder name must be a valid ‘letter’ (supporting Unicode’s definition of a letter), number, or an underscore. After that, most special characters are disallowed - but (,),',-,_,: are specifically allowed.

When I noticed this it was with a tagpath with a “å” in the middle of one foldername. So this isn’t the same issue. Thanks for the heads up though =)

It seems to only not work for me in an expression.
in tag binding it works fine

Doesn’t seem to work for me.

This is my setup: 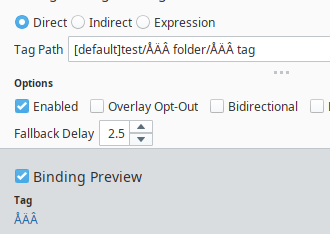 I can see the preview and everything aswell. The issue appears when you point to this view (including the binding) form another view through an embedded view.

Just updated to 8.1.22 today and this issue still remains. Is a fix in the works?

This issue hasn't yet been picked up to be worked on.

I had a typo in my earlier sample; you could try -Dfile.encoding=UTF-8 as a JVM argument to the designer launcher and/or providing the file.encoding property as a wrapper.java.additional property in the ignition.conf file. If the problem is a file encoder being created with default platform encoding somewhere, that would force Java on Windows to use a 'better' charset, which might fix this issue.

Tried this argument (with the corrected "UTF-8") and it still doesn't work.

How whould one add this correctly to ignition.conf?

I would use 2 as the index, since the other two are commented out, but it shouldn't matter. Otherwise, that looks correct.

One more thing is the translation works fine. So maybe the problem is in the configuration of the designer.