Background: I'm proving out a hub and spoke system using Ignition 8.1. I'm using Ignition Standard for the hub and Ignition Edge for the spokes. The hub is configured to have 3 incoming gateway network connections - one from each of the spokes.

The Problem: On each of the spoke gateways (not the hub), I have errors showing up in the log about every 30 seconds from the "UascServerHelloHandler" logger indicating that there is an out of memory error on Direct Buffer Memory. 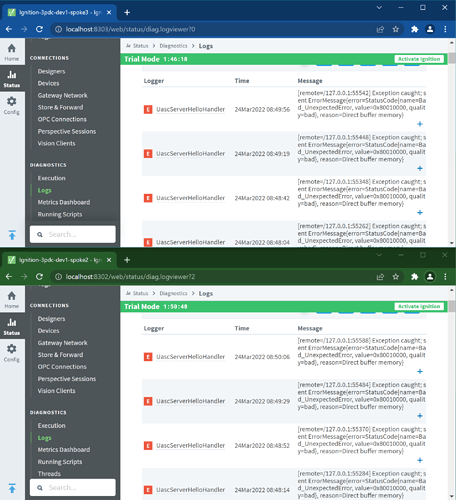 Strange. Is the loopback OPC UA connection faulted? Do these errors start happening immediately on restart or after some time? Can you upload the full logs for one of those spokes somewhere?

I want to think this is somehow related to Docker but I don’t have the skills to diagnose or troubleshoot that. @kcollins1 might have an idea?

edit: you might first just try increasing the memory available to your container images…

Agreed on the need for more full logs. You mention having these all in a single “pod”, which is making me infer that you’re deploying to Kubernetes (via the K8s distribution facilitated by Docker Desktop)?

If the containers are sharing a pod, that means they’re sharing network resources and you’re probably running into conflicts with the local OPC-UA server binding (to port 62541 of loopback interface). This would be akin to running multiple instances of Ignition within a single traditional Docker container (or Linux machine), with some of the same complications. Any reason not to have them in different pods?

Either way, I think you’ll need to give us more insight on your deployment definition, because it can definitely impact how things work.

Sorry, maybe wrong terminology. I am running several services through one docker compose file on docker (image: inductiveautomation/ignition:8.1.13). So… that’s what I’m doing. I’m not using Kubernetes. They do all share the same network though.

I have a mount to /usr/local/bin/ignition/data, but not to logs. I tried to get the logs using docker cp, but running CMD with admin privileges, I still only got a sim link to the wrapper logs… The .idb file I downloaded from the gateway logs is too large to attach (13mb).

The OPC-UA binding is actually faulted. This could be the source of the issue. I was hoping to keep them all in the same… I don’t know the right terminology… container with multiple containers inside(??) for organizations sake. But if it doesn’t work, there’s not a real reason not to separate.

Oh, also wondering why the OPC server would be faulted on the 3 edge servers, but not on the hub?

I am running several services through one docker compose file

Sorry, maybe wrong terminology. I am running several services through one docker compose file on docker (image: inductiveautomation/ignition:8.1.13). So… that’s what I’m doing. I’m not using Kubernetes. They do all share the same network though.

No problem, I made an assumption based on “pod”. Had you used “stack”, I might not have steered in that direction. Under Docker and with Docker Compose, each of these “services” are going to be brought up as individual containers on a common Docker “network”. However, unlike containers in a pod in K8s, each container will have its own IP address. So you shouldn’t be in the same trouble I was describing before.

I have a mount to /usr/local/bin/ignition/data, but not to logs. I tried to get the logs using docker cp, but running CMD with admin privileges, I still only got a sim link to the wrapper logs… The .idb file I downloaded from the gateway logs is too large to attach (13mb).

I definitely don’t recommend using bind mounts under Docker Desktop, as they typically perform horribly compared to named volumes. However, we’ll table that for now–the data volumes should work the way you have them defined [with the long syntax ensuring that they’re preloaded with pre-existing image data at the target location].

With respect to the logs, you’d retrieve those with something like this (targeting your hub service):

This would save a hub-logs.txt into the current directory on your host. Since Docker is collecting the stdout from the container in its own log store, we don’t duplicate that storage in the container, thus the symlink you see there to redirect to stdout.

The OPC-UA binding is actually faulted. This could be the source of the issue. I was hoping to keep them all in the same… I don’t know the right terminology… container with multiple containers inside(??) for organizations sake. But if it doesn’t work, there’s not a real reason not to separate.

What you’re doing to manage these is fine and you shouldn’t be seeing bind failures with these. However, for whatever reason, it does seem like something went wrong here. I’d recommend the following sequence of events:

I was able to bring your Compose solution in and get everything up-and-running without issue, so I’m hoping this sequence works for you and that there was just some lingering stuff related to those volumes causing trouble.

Okay, back to those volumes… I’d really recommend just going to named volumes. If you really need to peek at files in a given container (and associated volume), something like VSCode and their Docker extension makes this really easy:

Docker Dashboard even has some improved volume interactions nowadays: 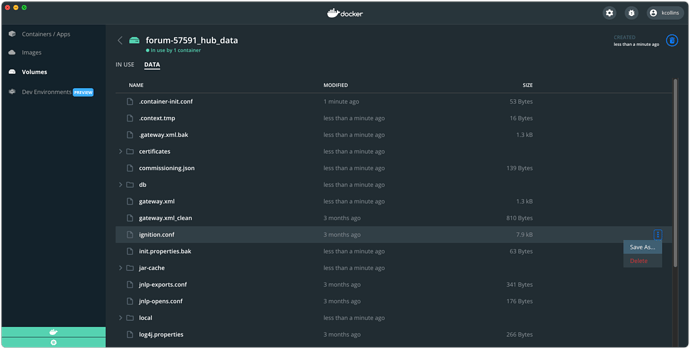 Hopefully some of this helps you get going!

I have the exact same UascServerHelloHandler error happening, but no docker involved in my setup. I’m running 8.1.13 Edge (aarch64) on a raspberry pi 4 (4GB) with Ubuntu 20.04.

The gateway will run fine for quite a while, sometimes days, but eventually the OPC UA server will fault with this error. Restarting the OPC-UA module doesn’t fix it, only a gateway restart. I’ve tried several Pi’s with the same result.

It would be helpful to get some more complete logs (specifically looking for some other causal events). I’ll spool up an instance on a spare RaspPi 4 (also 4GB, also ubuntu 20.04) that I’ve got here. This one is also one running off of an SD card. The only common link here that I see so far is that both of these setups might exhibit some slow I/O. That is only a surface level observation though, no conclusions yet.

If you are able to send some more comprehensive logs, I’d be happy to take a deeper look.

Were you able to find a solution to the problem kmorning mentioned with the raspberry pi 4 above?

I wasn't able to reproduce that scenario in my admittedly limited amount of testing. Do you have any logs that you could share?

Those were copied from the Status > Connections > OPC Connections page when the Ignition OPC UA Server is showing a "Fault" Status. I've also uploaded the wrapper log.

I don't see that particular log within the wrapper log, perhaps it was from one of the older wrapper log files . Either way I was able to glean that there you're using Edge edition and are polling some modbus devices and shipping some data to MQTT. I'll go ahead and setup a longer-running test bench (on my Pi 4) with some of these things in play to see if I can observe any memory issues and similar errors.

Well, I've setup a test environment polling some registers from a modbus simulator and publishing up to a test MQTT broker.. I'll let you know if I see any failures!

Can I ask how you connected them? Im looking at adding GPS (modbus) to my pi's running edge but all solutions I found are some sort of Hat. I have my pi's in cases for the cooling fan etc so a HAT wouldn't fit.

So it looks like I was able to reproduce this, although with some interesting base circumstances. I also used 8.1.15 and targeted Edge as you had. For my initial test, I just reset the trial every time it expired. It resetting the Trial Timer triggers a restart of a OPC-UA module (and dependents, here is a snippet from your log file, @Gerry_Dion, in which you seem to be doing a similar thing):

With each of these events, I saw an increase of around 50 or so MB of non-heap memory. Heap memory was pretty stable. It looks like it is probably related to Direct Buffer Memory allocated by Netty (within the OPC-UA Milo stack).

Thankfully, when I ran the same setup with a license (I ended up using Maker for this test), and as a result no periodic module restarts after trial reset, things were very stable and ran just fine.

Also, FWIW, under 8.1.21 (also still under Docker on RaspPi4), performing manual restarts of the OPC-UA module seemed to produce a similar increase in non-heap memory usage over time, but it seems that the threshold for being denied additional Direct Buffer memory is different--things continued to function as expected. The memory usage will continue to climb incrementally upon trial resets (and thusly OPC-UA module restarts), but it doesn't seem to experience premature OOM errors like before. Perhaps this is due to some of the Milo/Netty updates along the way, or the newer point release of JDK11? I haven't researched it fully.

Restarting the OPC UA module has been known to leak in the past. I'm not sure it's ever been fixed.

Modules being restarted when the trial resets is surprising behavior to me. Is that only with Edge?