I am trying to find where a tag is being written to in a project, but I’m unable to find it using the Find/Replace box.

I see a tag binding, a project library script and a tag even script. All of these items have been checked and they do not write a value of 1 to the tag. The library script isn’t being called and I commented out the line of code for verification. The tag event script sets it to a value of 0. Am I missing somewhere to search? 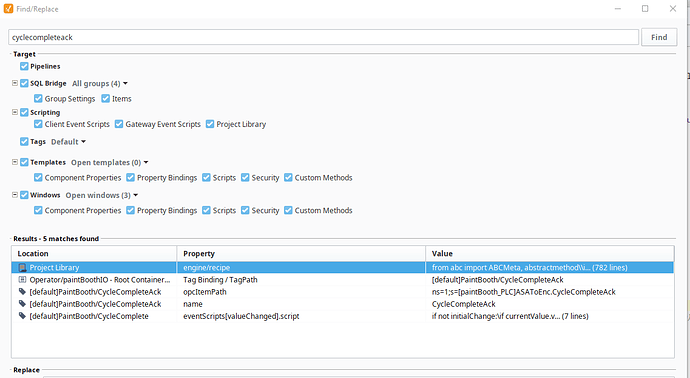 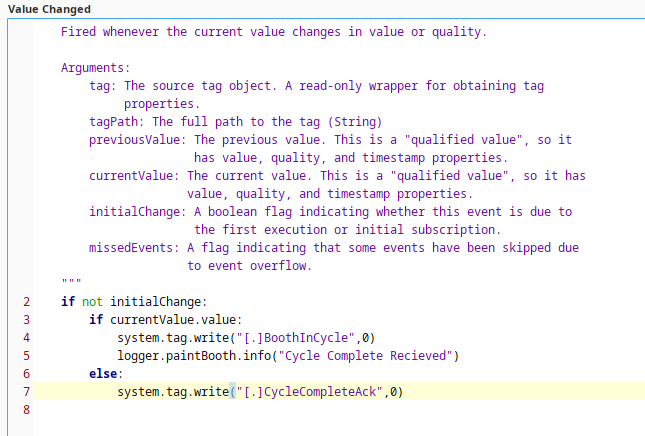 I should also add, that I have renamed the tag from “CycleCompleteAck” to “CycleCompelteAck_t” and something in Ignition is still setting the tag.

I changed the “CycleCompleteAck” tag from an OPC tag to a Memory tag and the PLC still shows the tag being updated. Its like there is an issue with the OPC server not seeing tag configuration changes.

It’s not being written by the plc or another client to the plc?

There is nothing else. This is a new system we are developing and there are no references in the PLC that write to it.

Make the tag Read Only and see what blows up?

I just did that and got the same results. It still gets written by Ignition. I also set it to a Memory only tag. We used to have a tag change event script that did this exact function, but it was removed a few days ago. Its like Ignition still remembers that script somewhere.

We used to have a tag event script on CycleComplete that would automatically set CycleCompleteAck. That was deleted, but the scripts still seems to be there in the background somewhere.

This is the current script on CycleComplete.

We are using 8.1.0. I see there was 8.1.1 released but reading the release notes didn’t appear to mention anything about this.

We rebooted the server and that stopped the write. There was definitely something hung up somewhere in Ignition that the reboot finally cleared out related to removing the tag change script.