Similar in functionality to Vision’s Keystroke Scripts, we have introduced Key Events into Perspective’s Session Events, which can be found in the latest nightly build. These events can be found under the Project > Session Events menu item: 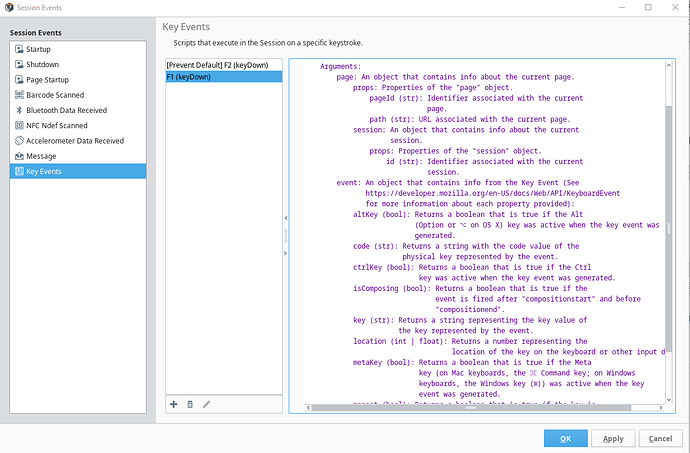 For single keys entered, the match can be a physical key typed, or the code generated by the key. Modifiers are additional keys that can be held down during a KeyboardEvent and are detectable in the event data. These include alt, control, shift, and meta (command). In addition, the resulting KeyboardEvent that is used for match detection has the following advance features that can be utilized: 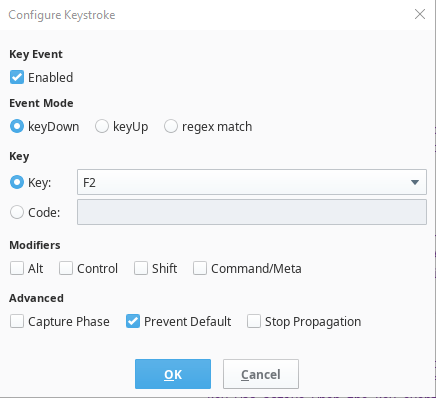 For a regular expression (regex) pattern match, the match will be made based upon a supplied regex pattern and a series of keys that have been stored in a match buffer. While there are a variety of use cases for this type of key event detection, the primary use case that we targeted with this feature was scanning barcodes from an HID barcode scanner.

To create a regex pattern to match against, an online tool like Regexr can be very helpful to test for pattern validity. Once a pattern is entered, the match buffer will need to be set. This buffer will always be the most recently typed characters and should be the length of whatever a “correct match” would be based on the supplied regex pattern to minimize the amount of processing that is done during key entry in a Perspective session.

The Pattern field in example below contains a regex that matches a # character, then 12 numeric characters, and then a @ character. Additionally, the match is made at the end of the match buffer, as denoted by the $ character used as an anchor. The total number of characters that this regex pattern is meant to match is 14, so that is used as the value for the match buffer: 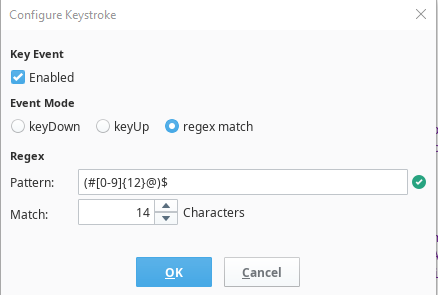 Note: Key event detection is meant to work inside of a Perspective Session and is not active inside of the Designer.

or a regex pattern (series of keys) and execute a script once the match has been detected.

I wish we have key event stroke for individual page or view not the whole session.

We have a lot of case in a single project that each page should behave differently for arrow key events.

As part of the event data, you’ve got access to the pageId and path, so you’ll be able to create different interactions based on the page being displayed. The session is there for you as well (in case you need it).

Good. But if we have this in view config section it will capsulated every thing in single view file and easy to manage.
Now configuration is in differnet part and hard to manage after sometime.
when you want to export a page to other project it may overwrite the new project event script as well. So I have to copy and paste my event code by hand to prevention overwrite other page event script.

Can we use the key event to conbine a keydown and a mouse click. For example a control keyDown and right click of a mouse open a pdf.

Can we use the key event to conbine a keydown and a mouse click. For example a control keyDown and right click of a mouse open a pdf.

You don’t need this feature for that. Mouse events already have a ctrlKey property; you would process every mouse event on your component, then check if ctrlKey is set to drive your additional logic:
https://docs.inductiveautomation.com/display/DOC81/Perspective+Event+Types+Reference#PerspectiveEventTypesReference-MouseEvents

thanks for your reply. I will test that out.